This Ordinance is cataloged with the broadside version of the Declaration of Independence and it sheds light on some of the post-independence restrictions on mobility and plantation labor. 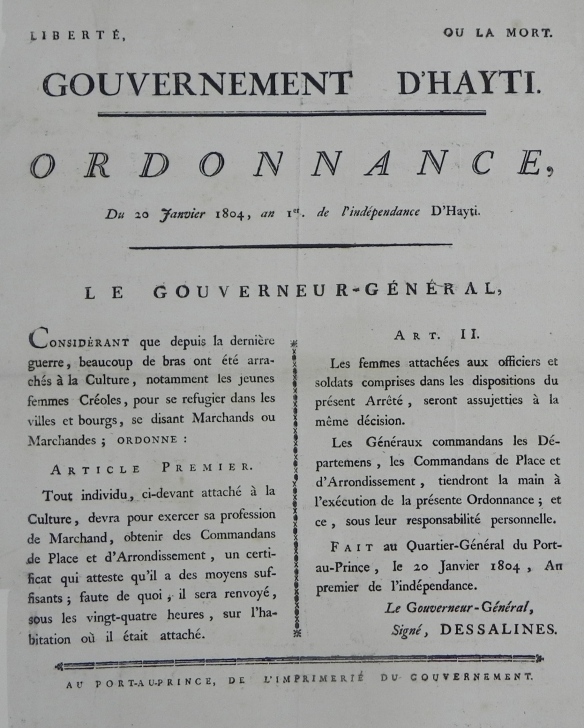 The document is dated 20 January 1804 and notes that people had been escaping the plantations to the cities by posing at market vendors (does anyone know of a better translation for Marchand(e)?). The ordinance points to creole women as the central problem but also includes the male conjugation of Marchand. Article 1 also notes that plantation laborers were attaché (tied to or attached to) specific plantations.

These kinds of policies have led historians to see parallels between the pre-revolutionary labor regime (slavery) and the post-independence focus on agriculture for export with the use of laborers called cultivateurs. Haitians laboring under this “new” system also saw the parallels and resisted by fighting for the development of a system focused on subsistence agriculture. They eventually succeeded and the nineteenth century saw the development of a system based on subsistence farming. This system is called the lakou and Laurent Dubois describes it in Haiti: The Aftershocks of History: “While the lakou involved some forms of communal assistance and exchange – relatives and neighbors might join together to help out with large harvests or the building of a house, for example – the system was generally constructed around close-knit family networks and emphasized self-reliance through working the soil” (p 108, Click here for Dubois’s full description).

Since my initial post, Patrick Tardieu wrote to me noting that this was the first time he had seen this document (or even any reference to it). He said that the law was not included in Linstant Pradine’s Les Codes Haitiens Annotes. A few weeks later, Tardieu wrote an article for the Haitian newspaper Le Nouvelliste in which he offers some additional analysis of the law – mainly that the need for agricultural production was part of a broader war effort and that the role of women in this effort needs to be recognized. A British merchant writing in 1806 also noted the specific role that women assumed after the Declaration of Independence. “The male population of St. Domingo is not numerous,” Robert Sutherland argued, “but the female population is considerable, Dessalines employing the latter entirely in agriculture.” [1] This is perhaps why Dessalines wanted to prevent these laborers from moving to urban areas as market women.

Tardieu also used the opportunity to encourage the Haitian government to fund and support an archival mission to London to discover other unknown treasures relating to Haiti’s early independence period. In my opinion, this mission would be well worth it!

Liberty, or Death
Government of Hayti
Ordinance
Of the 20 January 1804, 1st year of the independence of Hayti

The Governor-General
Considering that since the last war, many hands have been snatched from Agriculture, notably those of young Creole women, to escape to the cities and towns, calling themselves Market vendor; ORDERS:

All individuals, previously employed in Agriculture, in order to become a Market vendor, will have to obtain from the commandant of the town and the municipality, a certificate that attests that they have sufficient means; without which, they will be sent back, within twenty four hours, to the plantation to which they were attached.

The women attached to officers and soldiers included in the regulations of the current ordinance, will be subject to the same regulations.

The Generals commanding the Departments, the commandant of the town and the municipalities, will be in charge of executing the present Ordinance; and under their personal responsibility.

DONE at the Main Square of Port-au-Prince, 20 January 1804, the first year of independence.

AT PORT-AU-PRINCE, FROM THE GOVERNMENT PRINTING PRESS