The issue of naming in Haiti and the recognition or non-recognition of that name is something that I’ve been thinking about for a few years now. David Geggus wrote a great chapter called “The Naming of Haiti” in his book Haitian Revolutionary Studies. While undertaking my dissertation research, I was struck by the continued use of “Saint-Domingue” or “St. Domingo” by foreigners when they were referring to the territory that Jean-Jacques Dessalines and his generals had renamed “Hayti.” I wrote a short piece in the French journal Riveneuve Continents called “Identif[ying] the Island in its new situation”: The struggle for Hayti to overcome St. Domingo.” In this article I argued “Not only did the name ‘Hayti’ represent a break from France and a return to a time before colonialism, but the people assumed the roles of the rightful residents of the island. Natives; the land was theirs.” While I was a fellow at the John Carter Brown Library in 2013, I gave a talk and used map titles to illustrate the point that I was making about the uncertainty about Haiti’s status after 1804 and the resistance to fully recognize Haiti’s independence. The map titles that I studied suggest that international mapmakers were slow to adopt “Haiti” or “Hayti” as the name for the territory and only began to do so around the time that France officially recognized Haitian independence (1825). Even then, however, many maps continued to use the colonial name in addition to the new name.

I collected all of the maps published between 1804 and 1900 that reference the island of Hispaniola on CaribMap: A Cartographic History of Caribbean Islands and noted what they called the island or the western side of the island (I removed a few that didn’t seem to have matching maps and captions). This is simply a sample and I think it would be worthwhile to do a comprehensive study of all maps available! Here are the titles that I analyzed: Table of Map Titles.

The bulk of the 10 “Saint-Domingue” maps were published prior to 1825, the year that France recognized Haitian independence. Only one “Saint-Domingue or Haiti” map was published before 1823 (in 1815) and the first exclusively “Haiti” map was not published until 1871. I find it really interesting that even after France recognized Haiti’s independence, mapmakers continued to use two names for the territory; between 1825 and 1871, maps either labeled the territory “Saint-Domingue” or “Saint-Domingue or Haiti.” The United States was the last country to recognize Haiti’s independence (1862) and it is remarkable that even though all Atlantic nations had extended diplomatic recognition to Haiti, it was another decade before this recognition was articulated on a map.

Has anyone found other maps that don’t follow these trends?

Mitch Fraas commented below and included a link to this map in the University of Florida Library collection. The map, from 1822, is titled “Hayti, Formerly Hispaniola or Saint Domingo.” Interestingly, the same mapmaker (Fielding Lucas) and publisher (Carey & Lea) produced another map the same year with the title “Map of Hispaniola, Or St Domingo.” The next year, Lucas created another map titled “Hayti or Saint Domingo.” 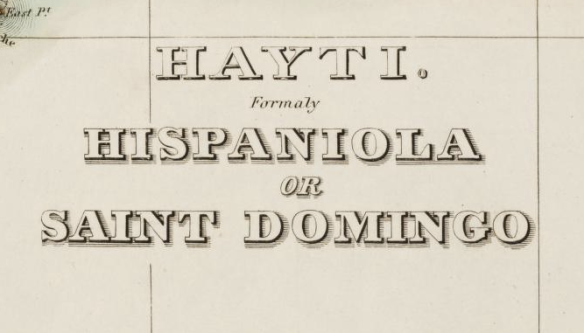 Mitch also found a map from 1861 in the Harvard Library collection titled “The Geffrard Map of the Island of Haiti,” published in New York. This map was published one year before official US recognition of Haiti. 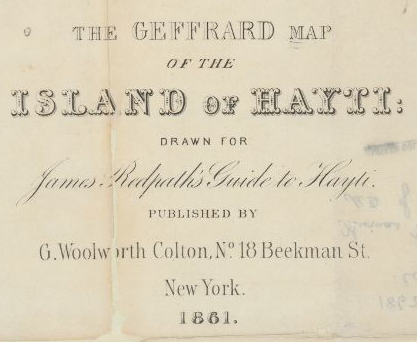 My diplomatic, legal, and economic sources (particularly in the case of the British), in contrast, begin using “Hayti” or “Haiti” in the early 1810s, despite the fact that no foreign power had officially recognized the country’s independence. This difference, I suspect, has to do with proximity to and contact with Haiti. Merchants almost immediately began calling the territory Hayti. The admirals from the Jamaica station who patrolled the waters around Haiti began calling the territory Hayti around 1810. By about the 1820s, most British officials were using “Hayti” rather than “St. Domingo.”

I’m curious why mapmakers were so resistant to the change of name; is this unusual? I am certainly not an expert on maps and would be grateful for any comments and observations!

3 thoughts on “Hayti or St. Domingo/Saint-Domingue”