Many thanks to Patrick Tardieu for sending this version to me! You can read more about the publication of this document in Tardieu’s chapter in my edited volumed, The Haitian Declaration of Independence. 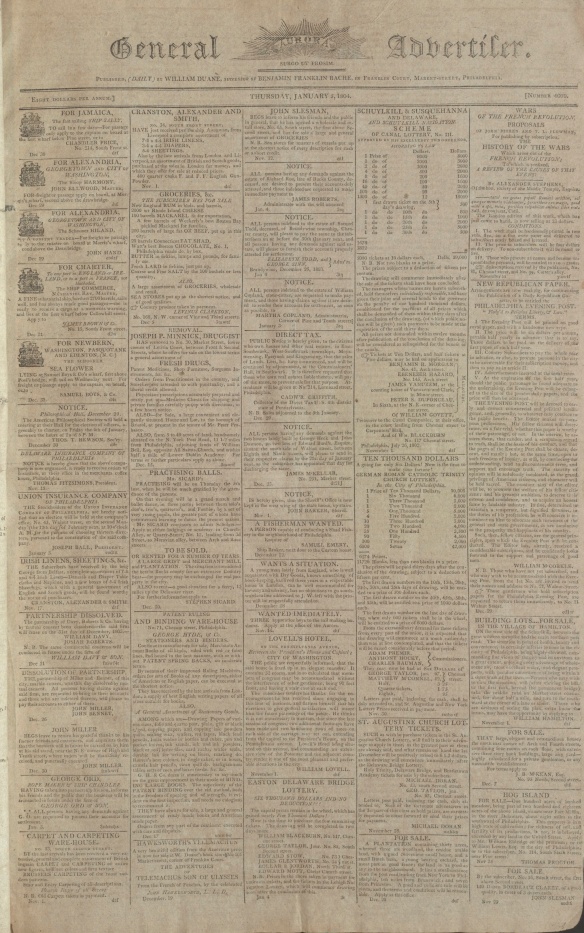 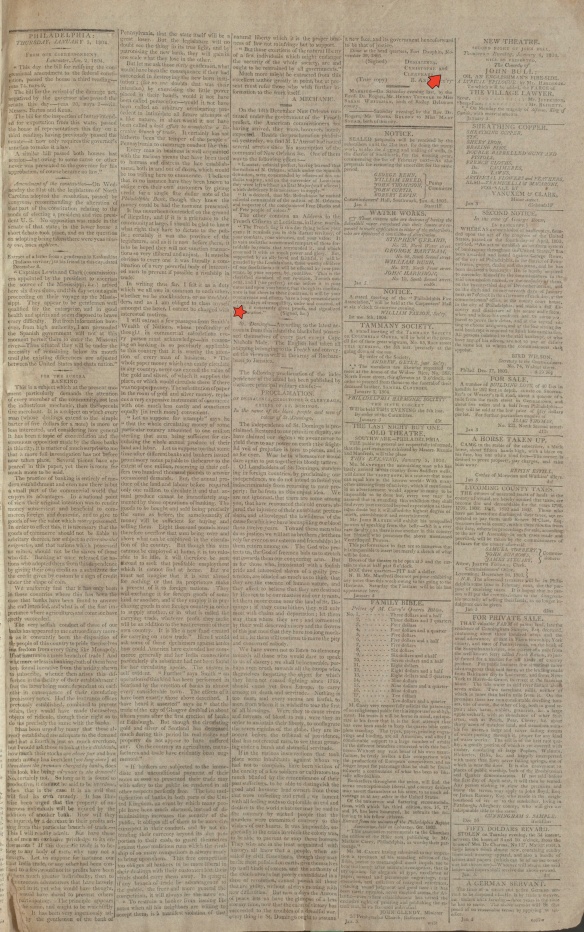 St. Domingo–According to the latest accounts from this island the blacks had possessed themselves of every part except Cape Nichola Mole. The English had taken all shipping belonging to the French and conveyed the views as well as the army of Rochambeau to Jamaica.

The following proclamation of the independence of the island has been published by the three principal military chiefs:–

In the name of the black people and the men of colour of St. Domingo.

The independence of St. Domingo is proclaimed. Restored to our primitive dignity, we have claimed our rights: we swear never to yield them to any power on earth: the frightful veil of prejudice is torn to pieces, and is so for ever. Woe be to whomsoever would dare again to put together its bloody tatters.

O! Landholders of St. Domingo, wandering in foreign colonies, by proclaiming our independence, we do not intend to forbid you indiscriminately from returning to your property: far be from us this unjust idea. We are not ignorant, that there are some among you, that have renounced their old errors, abjured the injustice of their exorbitant pretensions, and acknowledged the lawfulness of the cause for which we have been spilling our blood these twelve years. Toward these men who do us justice, we will act as brothers; let them rely for ever on our esteem and friendship: let them return among us. The God who protects us, the God of freemen bids us to stretch out towards them our conquering arm. But as for those who, intoxicated with a foolish pride and interested slaves of a guilty pretension, are blinded so much as to think that they are the essence of human nature, and they affect to believe that they are destined by Heaven to be our masters and our tyrants, let them never come near the land of St. Domingo; if they come hither, they will only meet with chains and deportation; let them stay then where they are; and tormented by their well deserved misery and the frowns of the just men that they have too long mocked at; let them still continue to move the pity and concern of nobody.

We have sworn not to listen to clemency towards all those who would dare to speak to us of slavery; we shall be inexorable, perhaps even cruel, towards all the troops who, themselves forgetting the object for which they have not ceased fighting since 1789, should come yet from Europe, to carry among us death and servitude. Nothing is too dear, and every means are lawful, to men from whom it is wished to tear the first of all blessings. Were they to cause rivers and torrents of blood to run; were they in order to maintain their liberty, to conflagrate the seven eighths of the globe, they are innocent before the tribunal of providence, that has not created men, to see them groaning under a harsh and shameful servitude.

If in the various insurrections that took place some inhabitants against whom we had not to complain, have been victims of the cruelty of a few soldiers or cultivators too much blinded by the remembrance of their past sufferings, to be able to distinguish the good and humane land owners from those that were unfeeling and cruel; we lament with all feeling souls so deplorable an end and declare to the world whatever may be said to the contrary by wicked people that the murders were committed contrary to the wishes of our hearts. It was impossible, especially in the crisis in which the colony was, to be able to prevent or stop these horrors. They who are in the least acquainted with history, all know that a people, when assailed by civil dissentions, though they may be the most polished on earth, give themselves up to all kinds of excess, and the authority of the chiefs always but poorly consolidated in a time of revolution, cannot punish all those that are guilty, without always meeting with new difficulties. But now a days the Aurora of peace lets us have the glimpse of a less stormy time, now that the calm of victory has succeeded to the troubles of a dreadful war, every thing in St. Domingo ought to assume a new face, and its government henceforward to be that of justice.