This song appeared in the Gazette Politique et Commerciale d’Haïti on 22 November 1804. The version I have is from a publication by the Bibliothèque National d’Haïti of the first two years of the newspaper.

In a lot of ways, the song reminds me of the Hymne Haitiène that was performed in January 1804. Both songs draw on French revolutionary traditions in their tune; the Hymne Haitiène is to the tune of the Marseillaise while Couplets is to the tune of the vaudeville in the Devin du Village (a play by Jean-Jacques Rousseau). But, at the same time as they draw on this tradition, they are both vehemently anti-French and anti-slavery. Couplets explicitly names the “vile slavery” whereas the Hymne Haitiène frequently references “liberty.” Anti-slavery and Anti-French sentiments, or “Liberty and Independence,” are the key factors of the end of the revolution (or, the “war of independence” 1802-1804) and of the early independence period.[1] Both songs also pay tribute to Dessalines’s personal role in securing national independence and individual liberty in Haiti. 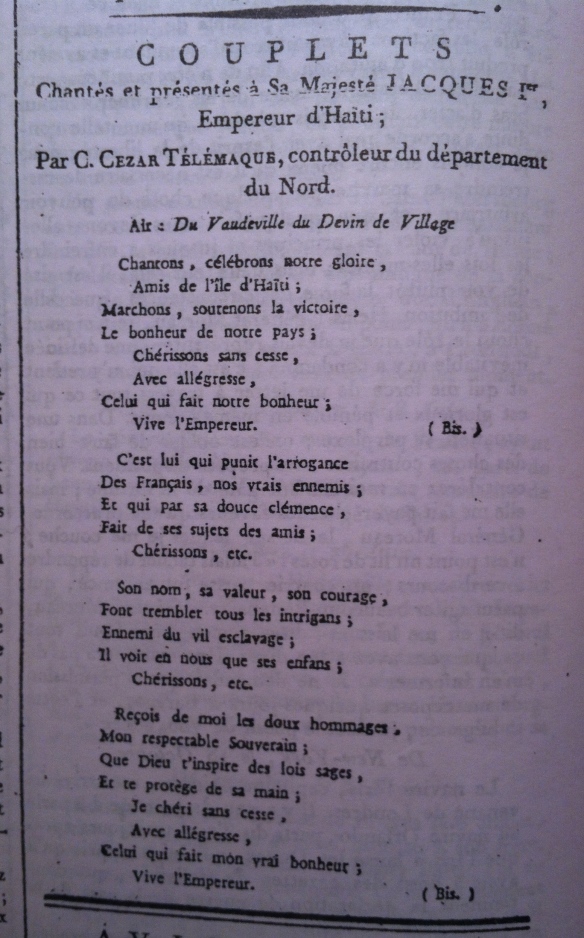 A really interesting aspect in both songs is the description of Dessalines as the “father” of the country and of Haitian citizens as his “children.” The characterization of the population as a family might have been an attempt to unite a very divided population (something that Dessalines also tried to do through a series of violent massacres in the early months of 1804). He clearly struggled with the creation of “nation” but these songs suggest that he deployed a number of different tactics to achieve this goal. I would also add his 1805 constitution to this series of attempts to create an “imagined community.”[2]

Here is my translation of Couplets, any corrections and additional interpretations are welcome!

Couplets
Sung and performed for His Majesty Jacques 1st
Emperor of Haiti
By C. Cezar Télémaque, comptroller[?] of the Northern Department.
Tune: The Vaudeville from Devin du Village

Sing, celebrate our glory,
Friends of the island of Haiti;
March, support our victory
The well-being of our country;
Always cherish,
With joy,
He who gives us happiness;
Long live the Emperor.

It was he who punished the arrogance
Of the French, our true enemies;
And by his sweet mercy,
Made subjects and friends[?];
Always cherish, etc..

His name, his valor, his courage,
Terrifies all of the schemers[?];
Enemy of the vile slavery;
He sees us as his children;
Always cherish, etc.

Receive from me the sweet[?] gratitude[?]
My respectable Sovereign;
That God inspires you with wise laws,
And protects you with his hand;
I always cherish
With joy,
He who gives me true happiness
Long live the Emperor.

[1] I make this argument in a forthcoming chapter in an edited volume on 19th century anti-slavery movements; Julia Gaffield, “’Liberté, Indépendance’: Haitian Anti-slavery and National Independence,” A Global History of Anti-Slavery Politics in the Nineteenth Century, edited by William Mulligan and Maurice Bric (London: Palgrave MacMillan, forthcoming May 2013).
[2] I discuss this aspect in further detail in: Julia Gaffield, “The Complexities of Imagining Haiti: A Study of National Constitutions, 1801-1807,” Journal of Social History, (2007) 41(1): 81-103.