The surviving character descriptions and images of Jean-Jacques Dessalines differ drastically but most tend to portray him in a negative light. In recent years, however, a more complicated picture is beginning to emerge of Dessalines as a person, a military general, and a political leader. “Best known for his military brilliance and his violence against French planters in the wake of independence,” Laurent Dubois argues, “he deserves as much attention for his rhetorical and ideological interventions as well as his determined and skillful diplomatic negotiations with foreign powers.”[1] Foreign observers were not usually kind in their descriptions of him and they emphasized his alleged ferocity and his illiteracy. Deborah Jenson has recently argued that we need to rethink the claims that Dessalines was born in Saint-Domingue since the earliest first-person accounts all describe him as “Bossale” or “African.”[2] There is still a great deal to be learned about Dessalines and I am hopeful that Madison Smartt Bell’s forthcoming biography will help fill in some of the gaps.

Here, I am attempting to collect as many images of Dessalines as possible (and will arrange them in chronological order) to see if any kind of patter emerges. Please send images or links to images if you have them! (I am sure that there are more than the ones below – I couldn’t find source information for some of the images floating around online).

Tabby McIntosh commented below and linked to this amazing sculpture of Dessalines at the National Maritime Museum in Greenwich! Thanks!

Normil Charles, The Statue to Dessalines on the Champ de Mars, Port-au-Prince, 1904. Photograph by Sir Harry Johnston, c. 1908-09. First published in Sir Harry Johnston, The Negro in the New World (London: 1910); reprinted unattributed, Statue of Dessalines, Erected 1904 in Anonymous, “Wards of the United States: Notes on What Our Country is Doing for Santo Domingo, Nicaragua, and Haiti,” National Geographic Magazine 30 (August 1916): 173. Photograph available through the New York Public Library Schomburg Center for Research in Black Culture

Lindsay J. Twa’s article “Jean-Jacques Dessalines: Demon, Demigod, and Everything in Between,” reproduced this image of a statue of Dessalines from 1904. It was erected first in Port-au-Prince and then moved to Gonaives. Thanks to Greg Pierrot for commenting below and linking to the image! 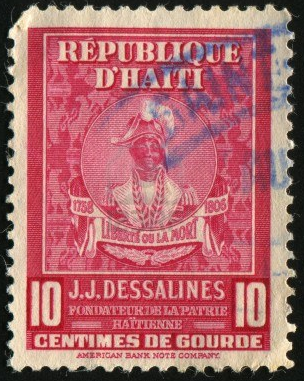 Greg Pierrot commented below and shared a link to this mural. We haven’t found any information about the artist or the location of the mural in Port-au-Prince – does anyone have any additional information? Thanks, Greg!

clip from Madsen Mompremier, Dessalines Ripping the White from the Flag, 1995.